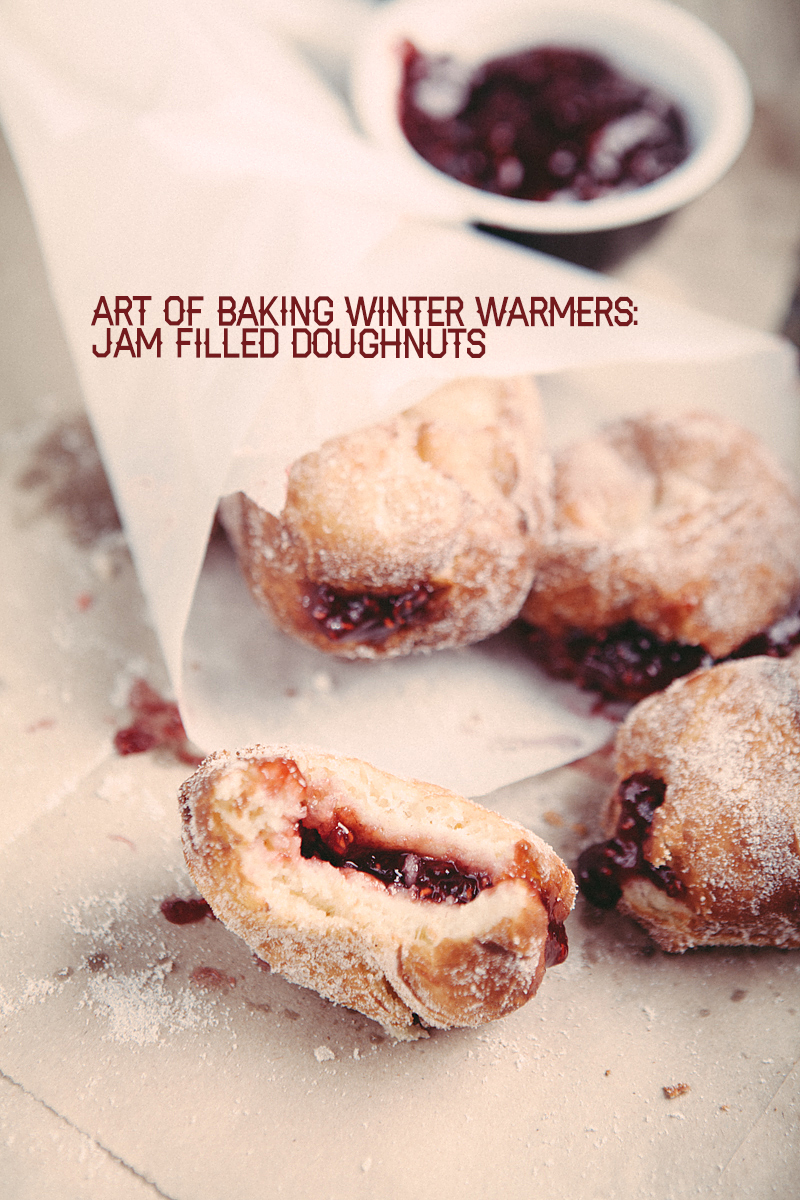 Doughnuts, bombolini, churros  What ever you call them, these deep fried ball of sweet doughy goodness are something that Art of Baking have been wanting to try for a while now. They really are one of the most guilty pleasures and all though they are a calorie bomb, t it well worth it. Unfortunately, this recipe is so easy to make, that you might find homemade donuts are no longer a once off treat.

Last Monday when Alex and I were coming home from catching up with a friend from Hobart, Alex reminded me how much he would love to eat a hot jam doughnut and we shivered at the train station waiting for what felt like an eternity for our train to take us home.

The next day when flicking through my new Gourmet Traveller magazine, I stumbled across a recipe for jam doughnuts. It was a sign. The recipe was not too complicate either and I had most of the ingredients at home. I made the dough in the kitchen aid and it was a breeze. We out in a simple store bought raspberry jam and rolled them in a cinnamon sugar. Eaten warm they are delicious treat.

The recipe said to let the dough prove for one hour until doubled in size. I found that my dough needed a bit longer, about 2 and a bit hour.  However once the dough has been cut into the doughnut shapes it does continue to rise so don’t be disheartened if after two hours you feel the dough has not risen as much as you would have expected.

The recipe also says to roll the dough out to 1cm thickness and again this does not sound very think but when cut into the doughnut shapes, it will rise. The doughnut also puff up a lot when they hit the oil, so the guide of 1cm thickness is probably accurate. The first time I made these I rolled them out to about 5 cm thick and I found that the middle did not cook as they were a bit too thick.

The fun thing with these doughnuts is that once you have the dough ready, you can make them into all different shapes. Keep them in round ball to fill with hot jam ( or nutella!) or even a vanilla custard or crème patisserie. Or cut them in rounds and cut a hole in the middle to make good old fashioned cinnamon donuts that I remember eating with my dad as a kid from Fantasy Doughnuts at our local shopping centre. The bits of dough you cut out can also be deep fired for one popping mouthful of goodness.

Which ever way you make them, the main thing is that they are delicious. We think this dough is a great solid base and I’m looking forward to trying them with nutella and perhaps a sugary pink icing!

We hope you enjoy making them too and let us know your favourite way to eat them! 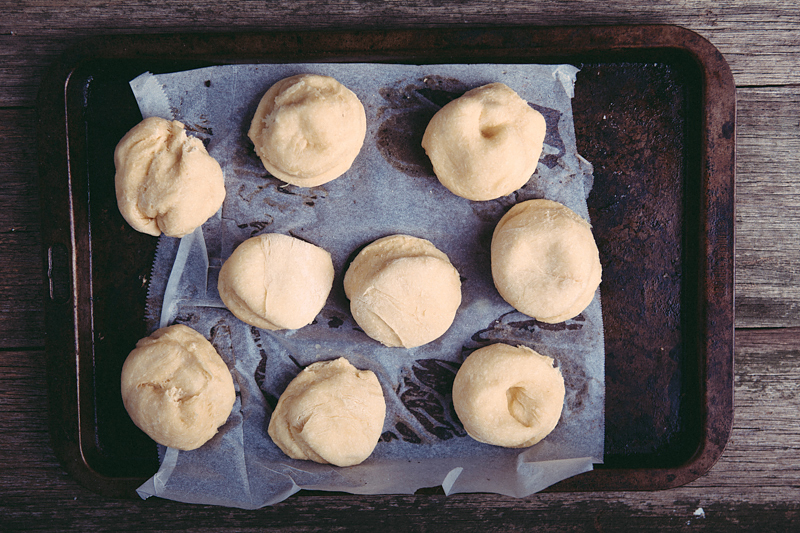 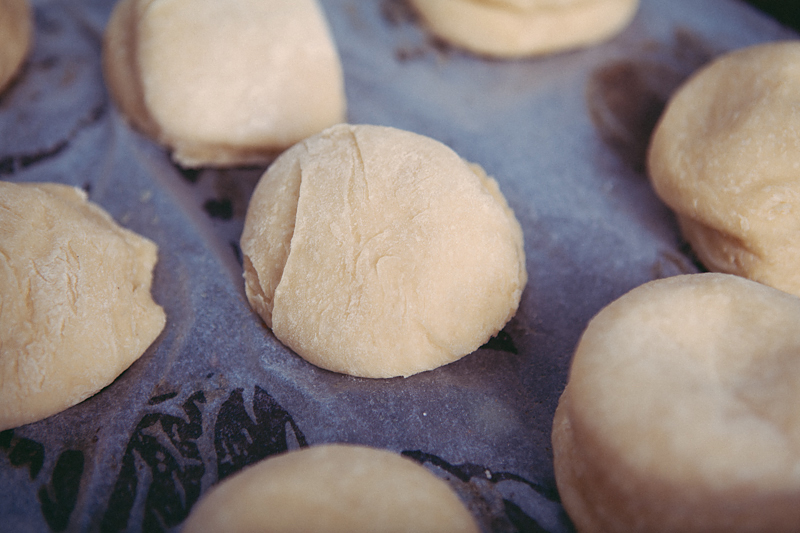 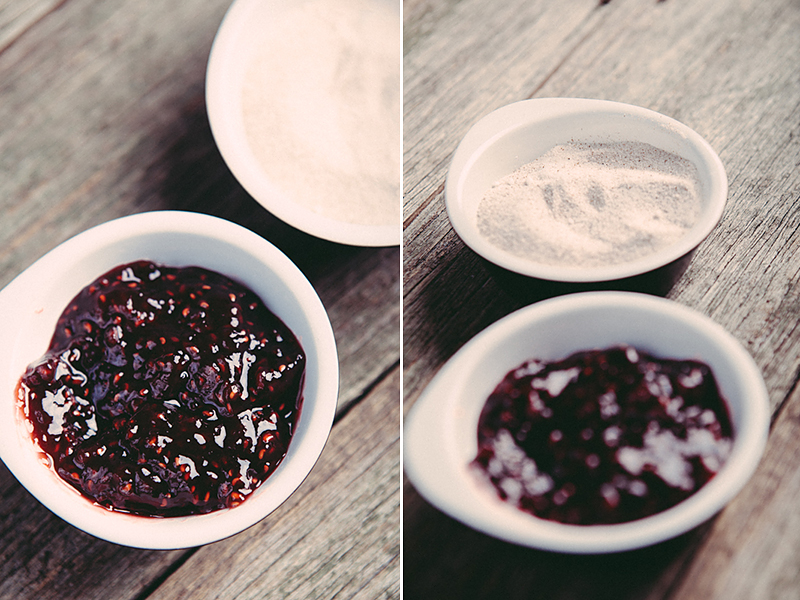 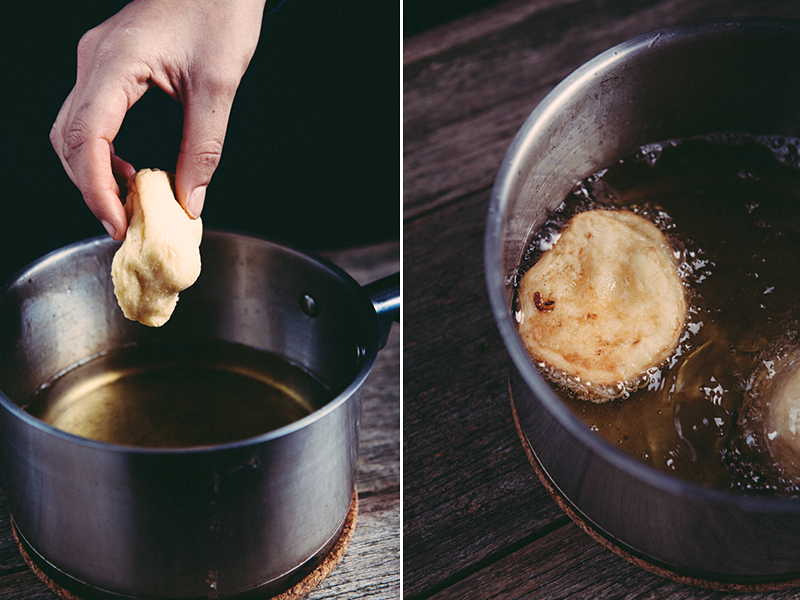 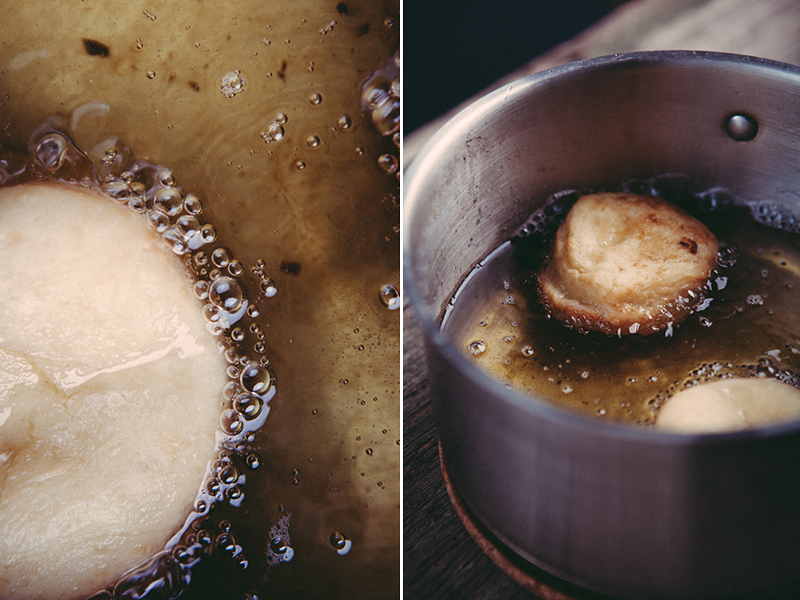 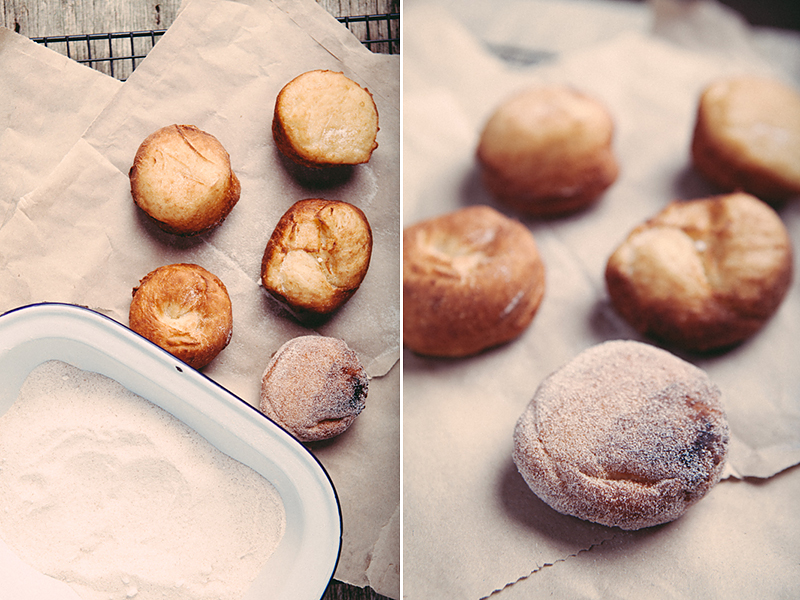 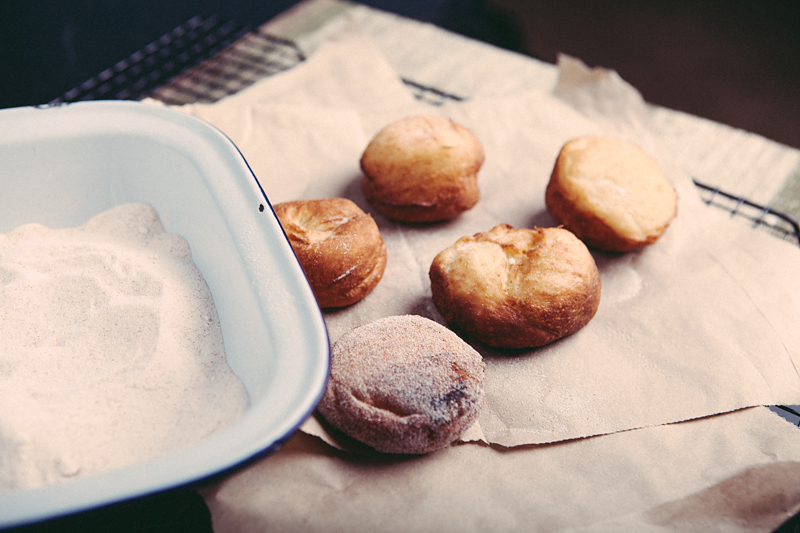 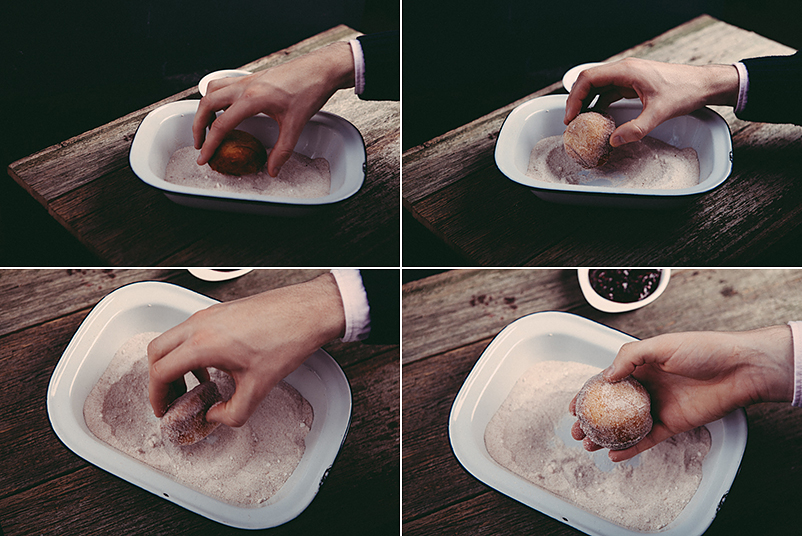 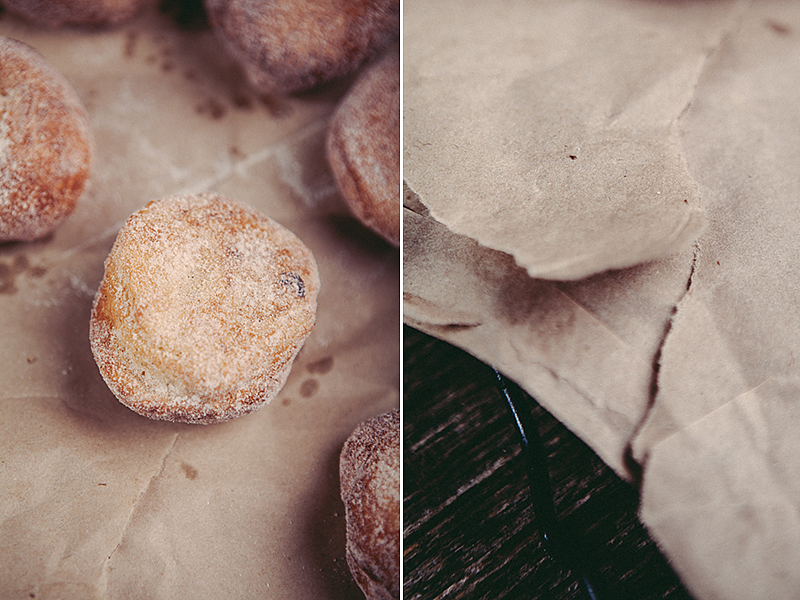 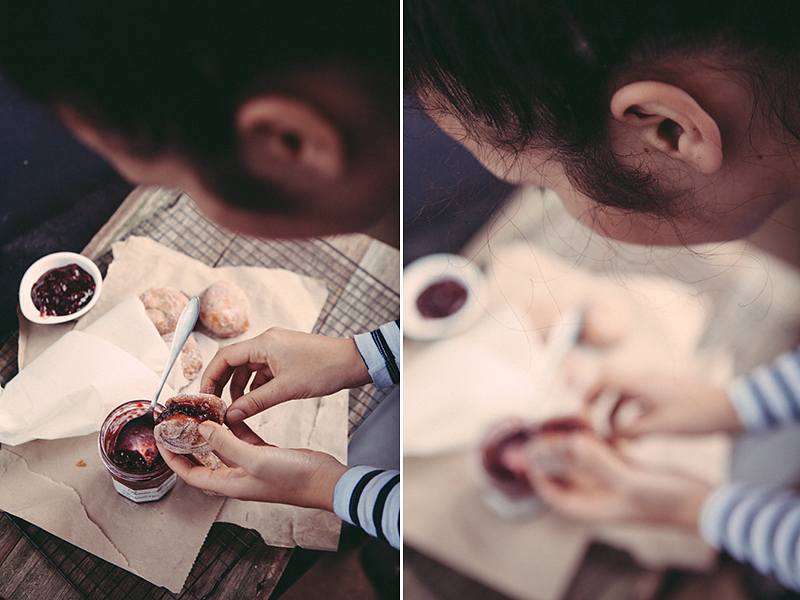 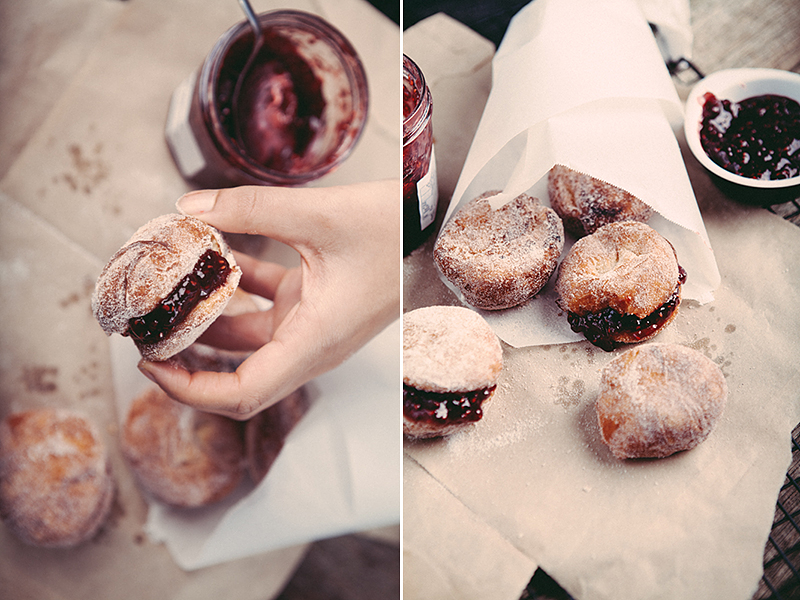 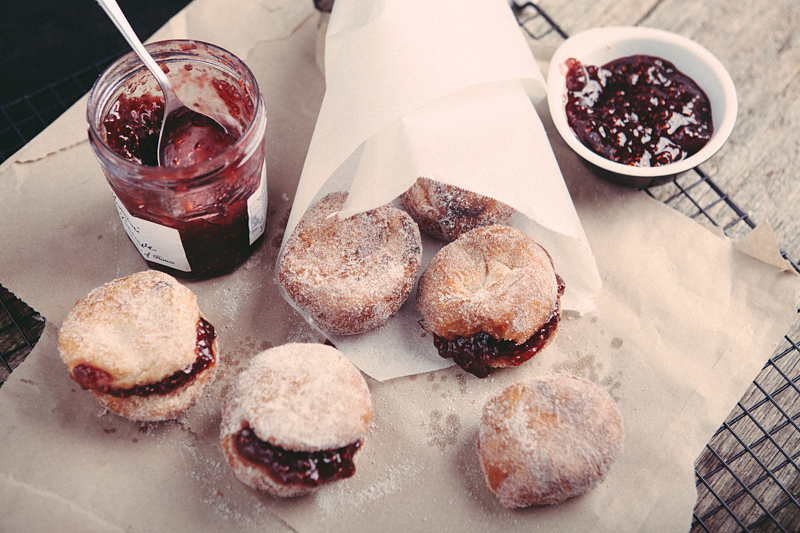 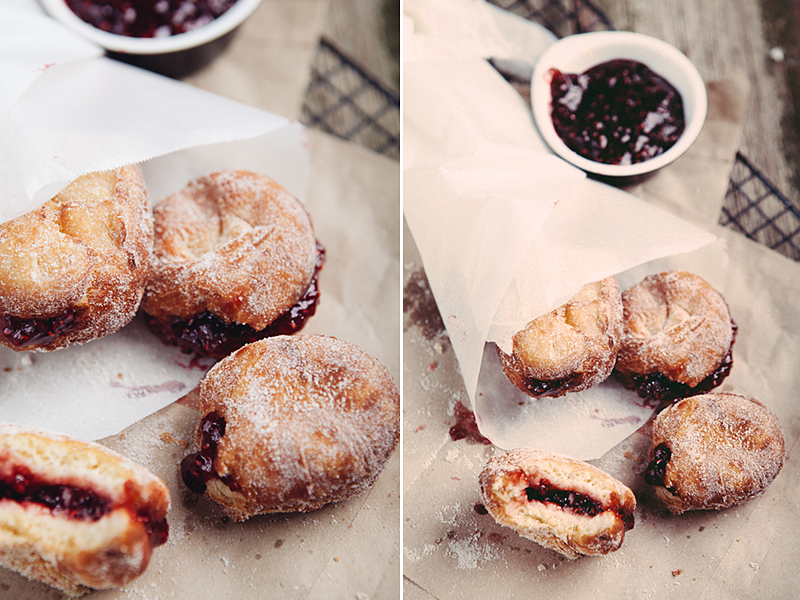 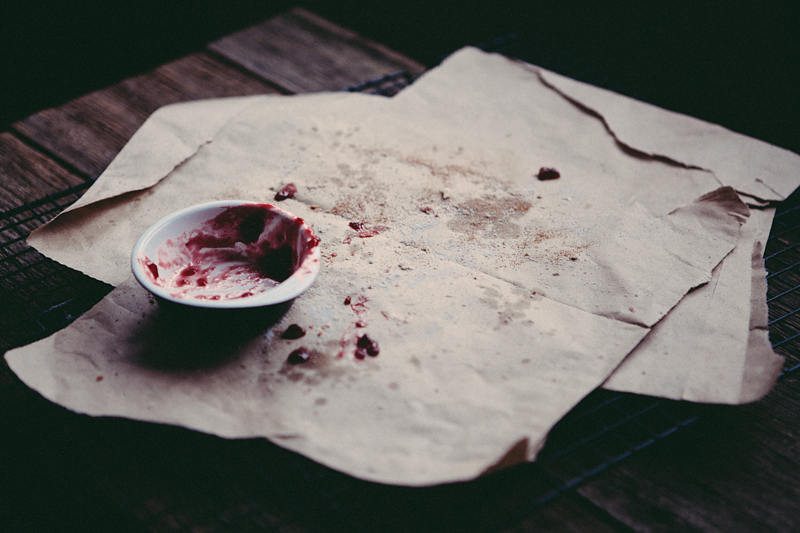 Print
Jam Doughnuts
Author: Adapated from Gourmet Travller
Cuisine: Sweets
Prep time:  30 mins
Cook time:  20 mins
Total time:  50 mins
Serves: 14
Ingredients
Instructions
Notes
To knock back dough, gather it in a ball and pound it down on your bench with your wrist. Gather the dough back up and repeat this a few times
3.2.1251
Don’t forget to like our Facebook page to receive more recipes like this.